Installation problems have different requirements for flow meters of different principles. For some flowmeters, such as differential pressure flow meters and velocity flowmeters, according to regulations, a certain length or a long straight pipe section should be equipped upstream and downstream of the flowmeter to ensure that the fluid flow before the inlet end of the flowmeter is fully developed. . While other flowmeters, such as positive displacement flowmeters, float flowmeters, etc., have no or lower requirements on the length of straight pipe sections.
Some flowmeters have certain errors due to the influence of installation. For example, Coriolis mass flow meters will bring great errors to use due to the influence of installation stress. Problems in the use of retrospective flowmeters may not necessarily be due to the problems of the flowmeter itself, and many situations are caused by poor installation. Common problems are as follows:
① Reverse the inlet surface of the orifice plate of the differential pressure flowmeter;
② The flow sensor is installed in a place with poor flow velocity distribution profile;
③ Undesirable phases exist in the impulse pipe connected to the differential pressure device;
④ The flow meter is installed in a harmful environment or in an inaccessible place;
⑤ The flow direction of the flowmeter is installed incorrectly;
⑥ The flowmeter or electrical signal transmission line is placed under a strong electromagnetic field;
⑦ Install the flowmeter susceptible to vibration interference on the pipeline with vibration;
⑧ Lack of necessary protective accessories. 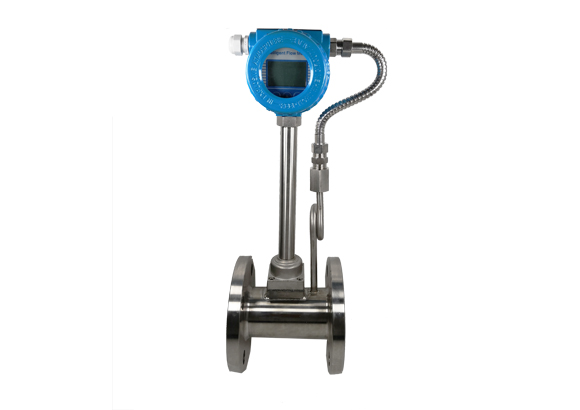 Some flowmeters, such as vortex flow meters and Coriolis mass flowmeters with piezoelectric detection components, are sensitive to mechanical vibration and are easily disturbed by pipeline vibration. Attention should be paid to the design of support on the pipelines before and after the flowmeter. In addition to the use of pulsation eliminators to eliminate the effects of pulsation, attention should also be paid to keeping all installed flowmeters away from sources of vibration or pulsation.
5) The installation position of the valve
The control valve and isolation valve are installed in the pipeline where the flowmeter is installed. In order to avoid some flow velocity distribution disturbance and cavitation caused by the valve and affect the flowmeter measurement, the general control valve should be installed downstream of the flowmeter, and the control valve should be installed in the flowmeter. The back pressure of the flowmeter can also be increased downstream to reduce the possibility of cavitation inside the flowmeter.
The purpose of the isolation valve is to isolate the flowmeter from the fluid in the line for easy maintenance. The upstream valve should be far enough away from the flowmeter. When the flowmeter is running, the upstream valve should be fully opened to avoid disturbances such as flow rate distribution distortion.
6) Protective accessories
The installation of protective accessories is a protective measure to ensure the normal operation of the flowmeter. For example, in positive displacement flowmeters and turbine flowmeters, some necessary equipment such as filters generally need to be installed upstream. All these equipments must be installed so as not to affect the use of the flowmeter.
7) Electrical connection and electromagnetic interference
At present, most flow measurement systems, whether it is the flowmeter itself or its accessories, have electronic equipment, so the power supply used must be matched with the flowmeter. When the output level of the flowmeter is low, a preamplifier suitable for the environment should be used. The output signal of some types of flowmeters is easily interfered by high-power switching devices, which makes the output pulses of the flowmeter fluctuate and affects the performance of the flowmeter. For example, the signal cable should be as far away from the power cable and power source as possible to reduce electromagnetic interference and radio frequency interference. Influence.
8) Pulsating flow and unsteady flow
In addition to the use of pulsation eliminators, attention should be paid to keeping all installed flowmeters away from pulsation sources. The most common sources of pulsation are hydraulic oscillations such as fixed displacement pumps, reciprocating compressors, oscillating valves or regulators, and vortex trains. Generally, differential pressure flowmeters have pulsating flow errors, and turbine flowmeters and vortex flowmeters also have pulsating flow errors. Unsteady flow is a flow that varies with time and slow pulsation is a special case of unsteady flow. Such as slow pulsations caused by the operation of an oversized control valve.
The flow meter can handle the pulsation effects of the flow sensor and the secondary display instrument separately. Install the flow sensor away from the source of pulsation, or install a low-pass filter such as a snubber (for liquids) or choke (for gas) in the piping system to reduce the degree of pulsation. The secondary display instrument can choose a flowmeter with good response characteristics (such as electromagnetic flowmeter, ultrasonic flowmeter) to increase the damping, and measure the pulsation parameters to estimate the additional error of the pulsation.